Because I work with microelectronics somehow, I wasn’t surprised at all recent news regarding the end of several companies in Brazil. Let’s face the facts: the microelectronics industry has never thrived in Brazil, therefore, it could never get bankrupt.

I recently saw a lot of people scared and concerned when reading this story on Terra. In fact, Terra disclaims that the content is from the site DINO.

When we talk about Brazilian chip …

To start, let’s see how the theme figures in “trend topics”: 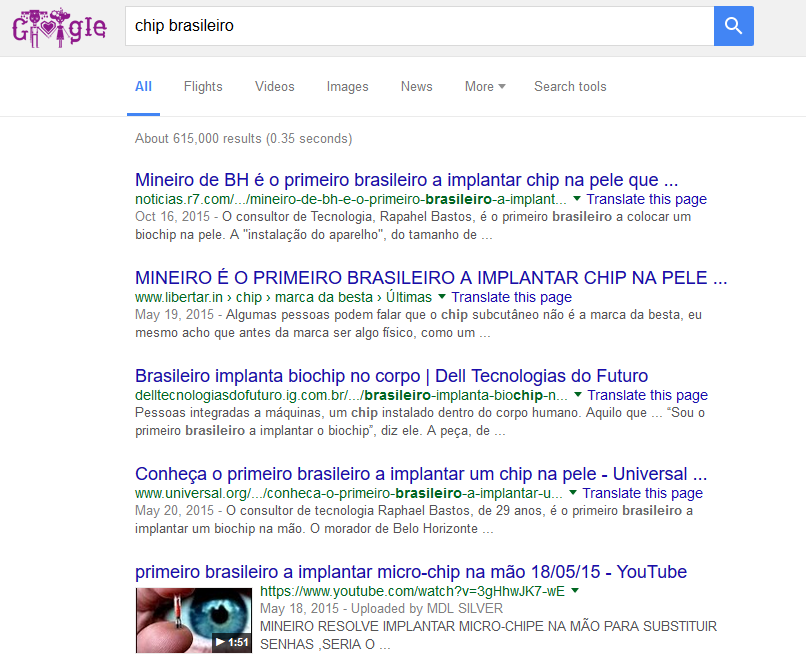 We just got bad start … But let’s not jump into conclusions. Let’s do some leveling here.

An industry without factory

Let’s talk about some fundamentals of industry: you buy raw materials, put effort on it, then you manufacture something and sell it. You buy land and bricks and manufactures houses to sell. You purchase flour and eggs and sell bread. In these cases, the relationship between production and product is direct.

As the world became complex, manufacturing is not always synonymous with owning the manufactured product: one lathe, for example, can make a wooden handrail or a steel carriage. The person who has the measures for such results owns the product; the lathe owner owns the process.

This also happened with microelectronics. There was a clear separation within companies between the manufacturing process (the foundry, equivalent to the lathe) with the chip design (who designed the piece that would be made on a lathe).

As one same machine can produce thousands of different chips, so why not specialize in just making chips for third parties? Yes, that happened. That so happened that as this report of 2014, 91% of chip manufacturing business are in the hands of 13 companies.

Companies started to have manufacturing capacity available to sell. There was people who wanted to manufacture their chip design but I had no money or investment to set up a foundry and began to buy this idle time. The so called “fabless” business model was born. In Brazil, most of the microelectronics industry is FABLESS.

Why bother with chip manufacturing if we can live just to do something for engineers to use in their products?

Who owns the chip design owns the product, who owns the factory owns the manufacture process of this product. Of course there is strong interaction between the project company and the manufacturing company. However, in the end of the day, a company can change its chip fabrication from foundry A to B, if both have equivalent processes.

There’s no need to manufacture chips to have a Microelectronics industry.

Yes, it does. Actually, it is a lucrative business. These are called Design Houses. The business model of these companies, especially, are one of the two:

Now I raise a question: if most companies are FABLESS, what is the major investments in addition to computers, licensing of software and personal tools are needed to make a good chip? The answer is: none. Then we get to the problem.

What is our problem?

In rough terms, one can guess that there is only a foundry for each of 300 million people in the WORLD. Therefore, there is not that much of a reason to have this fixation on making chips in Brazil: it does not matter where it is going to be manufactured, the main issue is to own the design of these chips, since even Brazilian population is not big enough to fill an entire foundry.

If a foundry is not the dilemma, because many countries with healthy microelectronics industry own chip design with almost no factory, what would be our real problem? Why does not our industry  take off?

Look at the picture below. 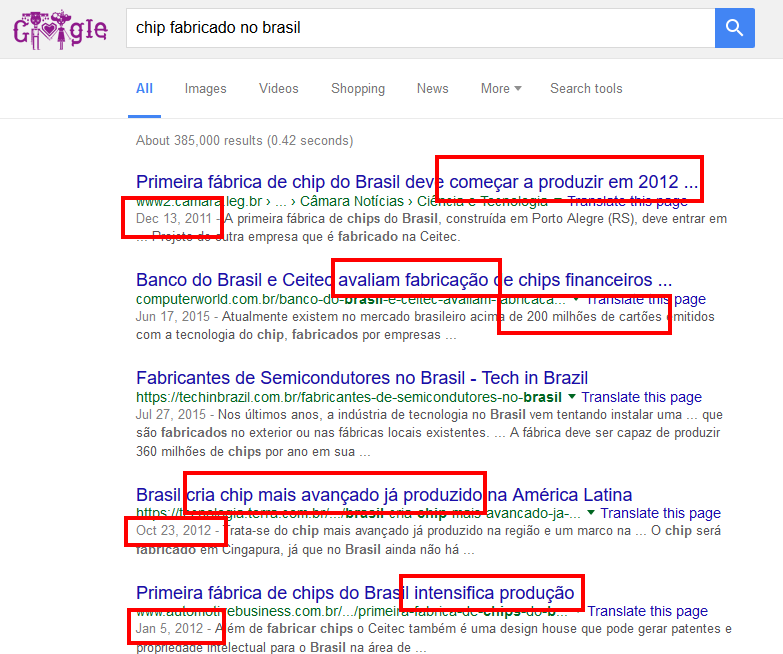 The Ceitec was the target for my Google search. For those who don’t know, the Ceitec is a state-owned company that survives with tax payer’s money , because it has negative equity. Comments on these findings:

There is something that I can’t understand in this country. The habit of doing things that don’t generate any “deliverable“. Equal to (shameful) Brazilian participation in the ISS. We didn’t delivered anything.

With microelectronics that would be no different. We are insisting on the model of “Prodless Semiconductor Company”. If we would have a foundry , I have no doubt that we would have the “Serviceless Foudry”.

MOST PLAYERS NEVER RELEASED A COMMERCIAL CHIP. Or, at least, chips that companies who design and manufacture electronic products here could use. We only make very application specific IC for very specific projects.

There is no chip that goes into a cell phone, no chip that goes in lighting systems, or in Calculators, or microprocessors… Nothing. You, yes, you reading this, who works on embedded systems design, have ever seen or heard, have any friends, whatever, about any kind of news about some chip sold by any Brazilian company? Did you?

Yeah. That is why it is so wrong.

The vast majority of microelectronics companies in Brazil has never bothered to have a commercially viable product. They always look after the product “to change the world”, or some very application specific. Most of the times, it never gets beyond design stage with little to none commercial appeal.

I heard a lot of microelectronics companies which managed to raise large sums from Finep and, after years, there is no chip to manufacture. Is it because of complexity? Lack of manpower? Or total lack of interest to win the market, since make a living on project is better than that and with less risk?

If this industry survived all these years without selling any product and they had money, than this investment money existed. Therefore, the incentive existed . What was missing was the product or the service. I’ve seen a lot in terms of business, but I have never heard of honest business with no product or service.

Well… Actually, this business model actually does exist in Brazil. But it doesn’t last long. That’s what we’re seeing. One day the money runs out.

All is not lost. But that doesn’t mean a lot.

This article showed up in the search. I decided to give it a try and read it. I also thought of a few other initiatives I have heard of. Removing the dead bodies, museums and the companies of antiquity and those many that are not stirring with microelectronics any more, we do have some sort of a market …

That makes me question again: where’s the product? Where’s the service?

There is something, but still nothing very promising… To make it work, once it starts it must be profitable. The microelectronics business is something that adheres to the laws of supply and demand: it doesn’t matter how much added value there is on a chip, if it doesn’t meet its application, it is worthless.

It’s hard to find product lists, datasheets and such in the scarce products of our electronics industry. This is the case where selling is a problem. Our industry is too focused on special projects, which do not scale to larger volumes. Without scale, there is no way of reaching a critical mass. We get stuck with special projects, without impact on the market. A pity: there are great heads within most of these companies.

As long as our microelectronics industry model is a model based and built to live on government money, we will never going to attract investments, we will never reach  viable products and we will only look at opportunities on which the value is in the design, not on the product.

I understand that the local Government wants to stimulate creation of manpower to attract companies, but it didn’t go well. Government-dependent initiatives have brought us to the place we find ourselves in: the end of money, the end of industry. Is it Government’s fault? In one of the rare times that I will not hold the Government guilty of something, I don’t think it is. There was a lot of money through tax relief and incentives. Just on research scholarships, as far as I researched, more than R$ 100 million.

Some initiatives seem to be more serious work, aiming on getting something on the shelf and to be used in products. That’s the way it should always be. A chip by itself does nothing and is worthless. Its importance depends on its application and that’s what Brazil lacks: the concept of applying stuff.

I always say: we like invention. We hate to innovate or, in a broader view, to manufacture and scale. In Brazil, any company that manufactures something is seen as an entity that serves only to exploit people. While the noble inventor will always be appreciated for its brilliance, even if it has no real world impact.

On the main picture, it reads: “Welcome to Brazil” and then “Development of Microelectronics is Forbidden”.

About rftafas 183 Articles
Ricardo F. Tafas Jr graduated in Electrical Engineering at UFRGS with focus on Digital Systems and achieved his Masters also in Electrical Engineering on Telecomunications Network Management. He also author of "Autodesenvolvimento para Desenvolvedores (Self-development for developers). Ricardo has +10 years experience on R&D Management and +13 years on Embedded Eystem Development. His interest lay on Applied Strategic HR, Innovation Management and Embedded Technology as a differentiator and also on High Performance Digital Systems and FPGAs. Actually, he is editor and writer for “Repositório” blog (http://161.35.234.217), editorial board member at Embarcados (https://embarcados.com.br) and he is Management and Innovation Specialist at Repo Dinâmica - Aceleradora de Produtos.
Please login to comment
0 Comments
Inline Feedbacks
View all comments